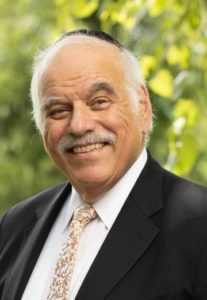 Milty, as he was affectionately known by his myriad friends and business associates, constantly thought of putting others first. His integrity in the field of health care was legendary, foregoing opportunities to make great profits, if the transactions were not one hundred percent honest.

He had tremendous respect for Rabbanim and was especially close with our Rosh Yeshiva, Rabbi Binyamin Kamenetzky, zt”l, and generously responded to any of his myriad requests for numerous charities.

Milton and Sandy’s generosity in dedicating the Ostreicher building, was an integral part of the yeshiva’s ability to grow and prosper in the 1990s and beyond.

Together, with his beloved wife, Sandy, tibadel l’chaim tovim aruchim, he was a fountain of chessed, done in a most secret and tzniyos manner. Each day since his passing, new stories emerge about his magnanimous kindness and charity in helping others begin businesses, rebuild businesses or simple charity for those who were in need.

A scion of a prestigious family who were devoted chassidim of the Munkatch dynasty, he blended the worlds of yesteryear with a deep dedication to the Muncazer Rebbe, with the relevance of today’s modern era in his involvement and support of the Young Israel of Woodmere.

He lived to see nachas from his beautiful family, three sons who are distinguished alumni of YOSS,
Matthew, Jason and Ari, and together with his daughters Lara, Rebecca, and Jaclyn, and many grandchildren.

May Hashem our dear friend and patron, Mrs. Sandy Ostreicher continued nachas from their illustrious family which she devotedly raised to Torah and Maasim Tovim, as Milty always pronounced, “tzu Goht uhn tzoo leit” One must be pleasant and act properly for both G-d and his fellow man.

The Yeshiva of South Shore is honored to establish the Milton Ostreicher Memorial Scholarship Fund in his memory.