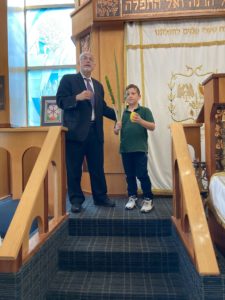 With only a few full days of school before Yom Kippur and Sukkos, the Hanhallah felt it was important to gather the talmidim to hear words of inspiration, and sing and dance together in achdus in preparation for Succos and Simchas Torah.

The Succos assembly for grades 1-4 opened with the singing of a stirring and beautiful Avinu Malkeinu. The boys were then treated to a visit from the Rosh Yeshiva, Rav Mordechai Kamenetzky, who spoke about our relationship to Hashem as both our father and as our king. He also explained that teshuvah is like an escalator. All you have to do is climb a small step on, and we can be elevated to great heights. The Menahel, Rabbi Robinson related a touching story of how one person experienced a rewarding surprise after apologizing for a wrong that he committed.

Rabbi Drebin then spoke to the boys about Succos. He displayed a lulav and esrog, and reviewed the many dinim of their kashrus and two to shake it, he then called up two boys to practice in front of everyone. He then led the crowd with live music and singing Sukkos songs, in anticipation of the great joy and spirit of Sukkos. 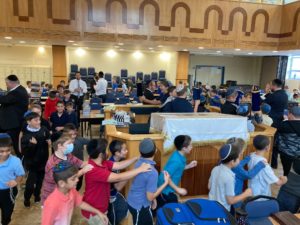 Finally, each of the classes were invited to dance around the bimah with their Rabbiem holding their “Sifrei Torah” while singing Ki MiTzion and Toras Hashem Temimah. You could feel the excitement in the air as the anticipation for the Simcha of the upcoming yom Tov of Simchas Torah built up. The boys surely have what to look forward to!

The assembly, packed with meaning and Ruach, excited the boys for the upcoming Yomim Tovim. We are looking forward to a full winter of learning after the boys come back from an uplifting Yom Tov!